The first and second part of my series can be found here, and here. Don’t worry, this will be the final installment.

Is this the golden age for the shortstop position? The quick answer is no. Perhaps the better answer to this question, though, is not yet. There’s a very good reason as to why a number of baseball folks can’t stop talking about the position. In other words, there’s a very good reason why I’m posing this question in the first place. It doesn’t seem utterly crazy, and that’s notable in itself.

This past season saw the promotion of Francisco Lindor, Carlos Correa, Corey Seager, and Addison Russell — all of whom have been on top-prospect lists in recent years, and all of whom had very strong rookie performances. Yet, the insane part is that there are more coming. In Baseball Prospectus’ newly released Top-101 prospects, 19 of them were shortstops, including the number-one overall prospect.

BP’s own Christopher Crawford asked some scouts in the industry if they got it right. Were there too many shortstops? It’s obviously difficult to determine if this is true, and probably only time will have the answer, but as Crawford said, this exercise helped illustrate that the position is in tremendous shape. 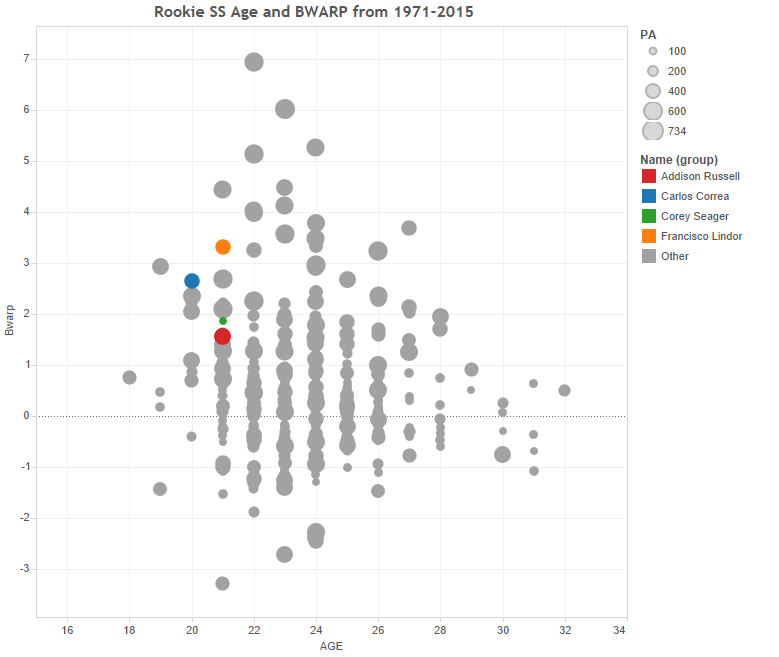 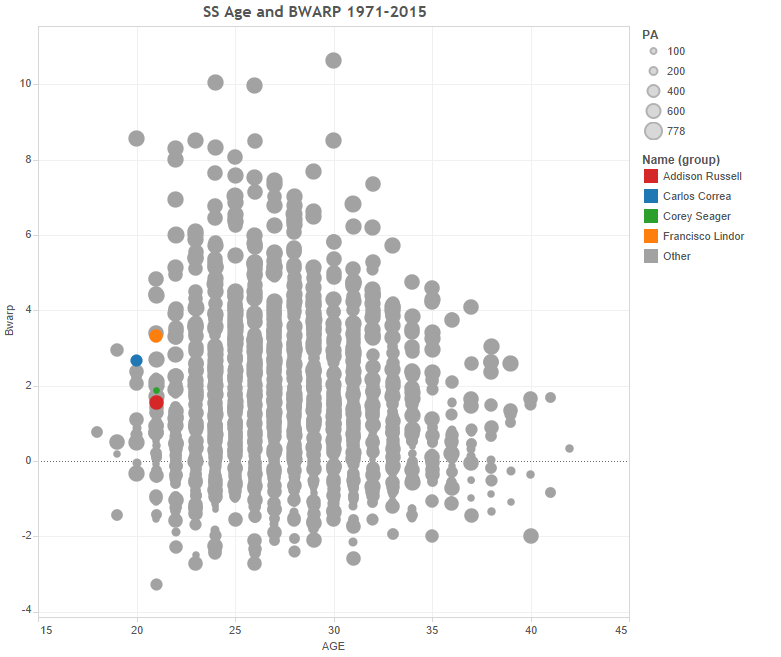 At just 20 years old, Carlos Correa became the youngest rookie shortstop to have produced this much BWARP, and Cal Ripken is the only rookie 21-year-old to have produced more BWARP than Francisco Lindor. Corey Seager ranks sixth in this category (rookie 21-year-old shortstop BWARP), which in general might not sound very impressive, but he was able to achieve this feat in just 113 plate appearances, which is much lower than his counterparts. Even more impressive is that Alex Rodriguez is the only shortstop to produce more BWARP as a 20-year-old than Carlos Correa.

Plus, to reinforce the notion that this rookie class might be headed for true greatness, it’s one of the youngest rookie classes to have produced this much value. 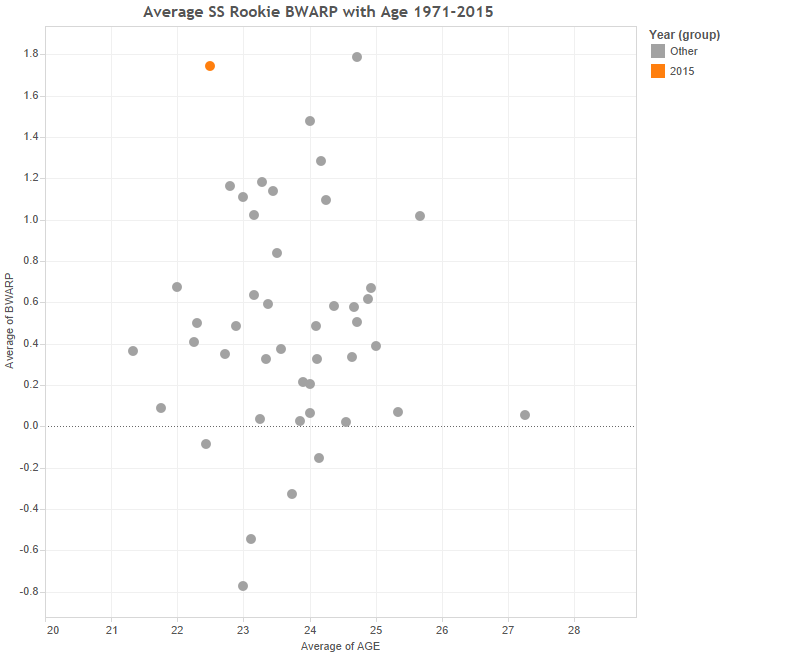 I, therefore, wanted to see how this rookie shortstop class performed compared to other rookie classes and compared to the other positions. This time, I looked at the average rookie BWARP by position. Keep in mind there’s a minimum of 100 plate appearances. 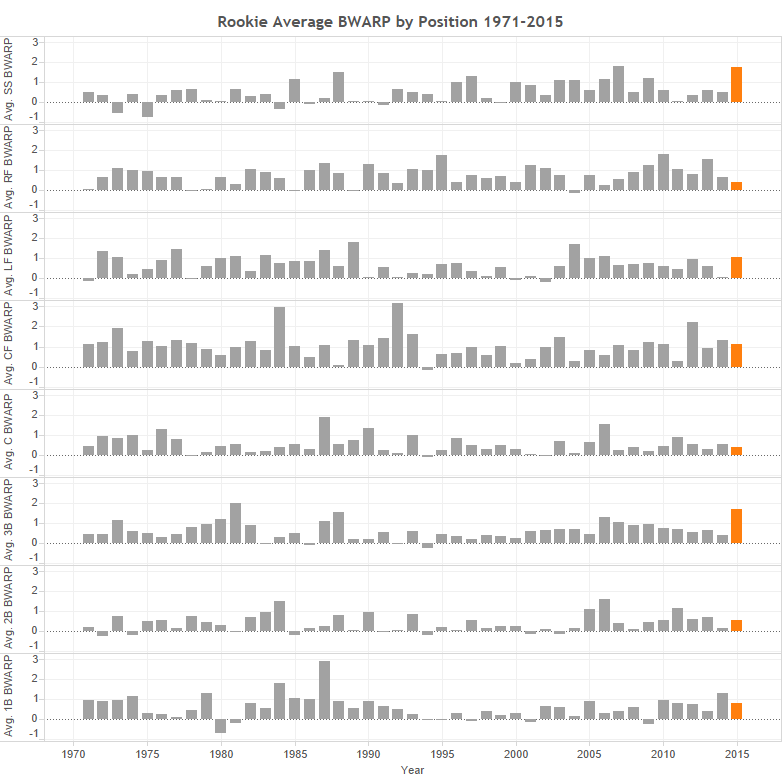 Now, a lot still can go wrong. Shortstops could get injured, and, if we’re being honest, probably will get injured. Some may experience prolonged struggles as they adjust to the majors, and some should probably be expected to regress. With that being said, the amount of young and talented shortstops is unprecedented. Plus, more quality young shortstops are coming from the minors. Orlando Arcia is likely to make his debut next season, and with the trade of Jean Segura, the Brewers have opened the door for his ascension. The Nationals, on the other hand, are biding their time with Danny Espinosa at shortstop and should see Trea Turner return to the majors in 2016. Which would mean, that two top-20 prospects who are shortstops should make another added impact at the position. And that’s not even getting into the possible best minor-league shortstop out there — one scout told Christopher Crawford that J.P. Crawford was the best shortstop in the minors. His ETA is scheduled for 2017 — therefore, we might not see him in the majors this year — but it means that quality prospects are going to keep coming year after year, and that’s even more reason for people to be bold about the position.

It probably won’t shock anyone but, for the Brewers, the position that had the highest rookie contribution in 2015 was right field (the position of Domingo Santana, even though he did play games in center field). 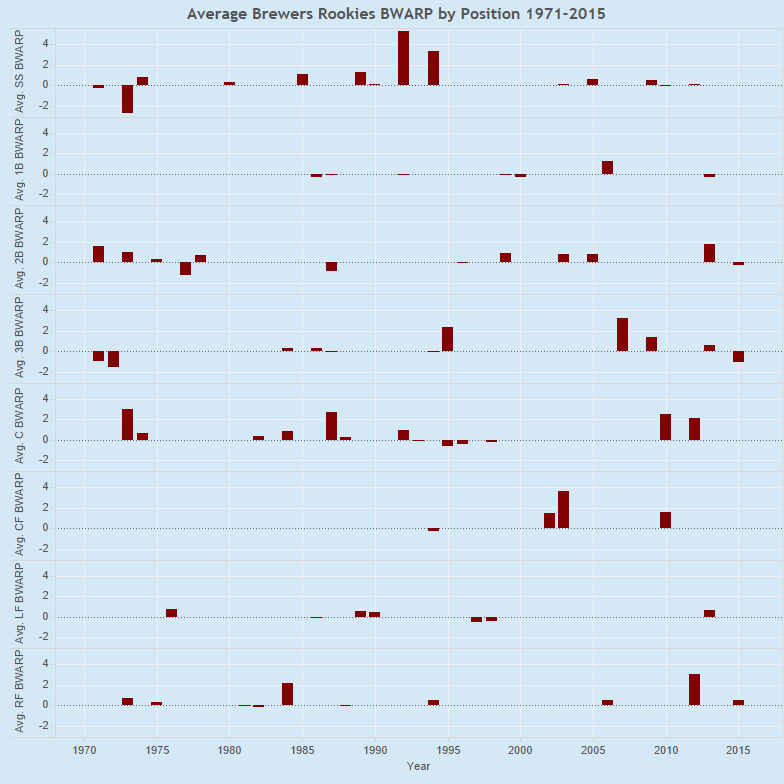 The best rookie positional performance for the Brewers was, once again unsurprisingly, in 1992. Pat Listach has already been written about on this site by Seth Victor, chronicling his debut and his subsequent quick downfall. (Data from 1992-1997). 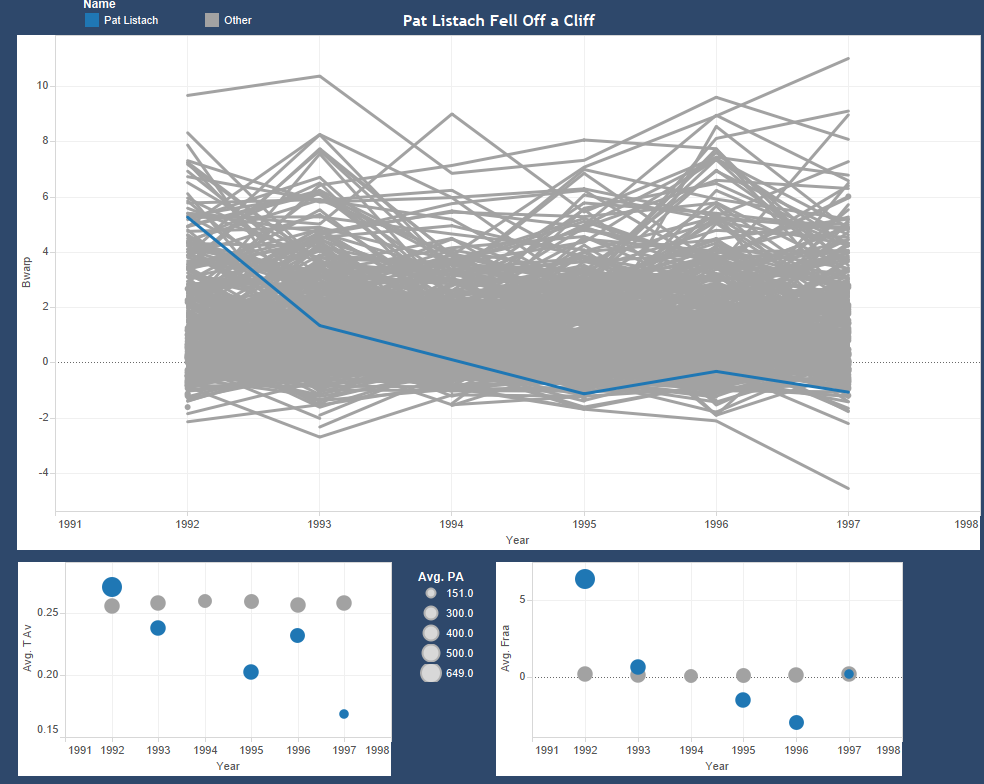 As Victor mentions, Listach was hurt by his knee troubles, which probably hindered his ability to play quality defense.

Listach had better-than-average offensive numbers, but he was never a great hitter. He had a decent ability to get on base, but never hit for much power and sported an unsustainable .366 BABIP in his rookie year. He was also a good baserunner, producing a 7.2 BRR and stealing 54 bases. Instead, it was his ability to play excellent defence that separated him from his peers. The knee troubles, then, undoubtedly played a factor in his quick drop off. Defense does decline quicker than other skills, but the drop off was so drastic that it would be foolish to assume that there weren’t other factors at play.

Nevertheless, Listach’s tale might be a sober reminder that even though some rookies succeed in their rookie seasons, it doesn’t necessarily mean that they will go on to have great and fruitful careers.

But most of Listach’s value came from his glove and even in his rookie season he was 24 years old. These young and talented shortstops in Major League Baseball are not only younger, but seem to be better hitters — meaning that they probably will have more sustained success, as defense typically declines earlier than offense, and the defensive metrics tend to take longer to stabilize. Even though some of the rookie shortstops might regress, then, it’s entirely reasonable to expect this rookie class to keep getting better in the years to come. Thus, in the not too distant future, we might truly be experiencing the Age of the Shortstop.

Thanks to Rob McQuown for research assistance.