TL;DR: Chris Carter hit two bombs and the pitching held off the Angels as the Brewers won 5-4.

Top Play (WPA):
Jonathan Lucroy’s two run homer in the bottom of the 5th, which tied the game at 4 was the top play of the game (.247). All of the Brewers runs were scored via the long ball, as Angels starter Nick Tropeano had a rough go of it last night. The three home runs he gave up equal his career total in his first 16 MLB appearances. The Angels staked Tropeano a four run lead via singles and walks in the 1st and 3rd innings. However, Tropeano had issues all day. He didn’t record a single clean inning. His 5 innings of duty resulted in 5 hits, 5 runs, 5 walks, and 6 strikeouts.

Lucroy and Carter mauled Tropeano. Combined, they went 4-5 with a walk, and the three aforementioned home runs. His struggles with the team as a whole can be explained in the next two charts. First, his strikezone plot. Tropeano was all over the place, consistently placing pitches in the middle or outside of the strikezone. 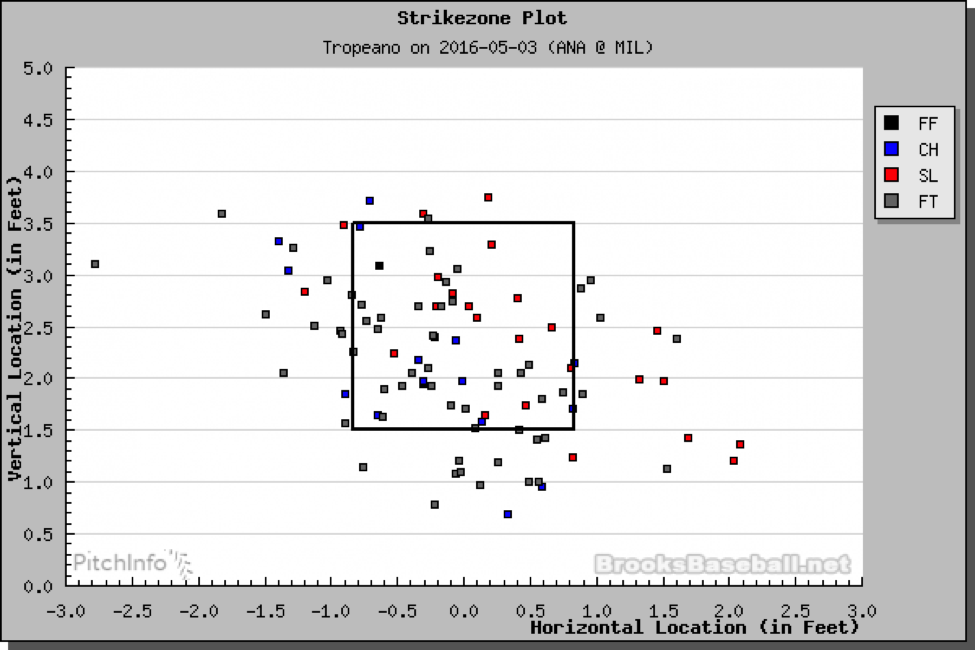 For this second chart, the most telling part for me is those red dots, which represent the Carter and Lucroy home runs. Those weren’t great pitches that the batters got lucky hitting. Those were right in the wheelhouse, and tonight the Brewers made the Angels pay for those mistakes. 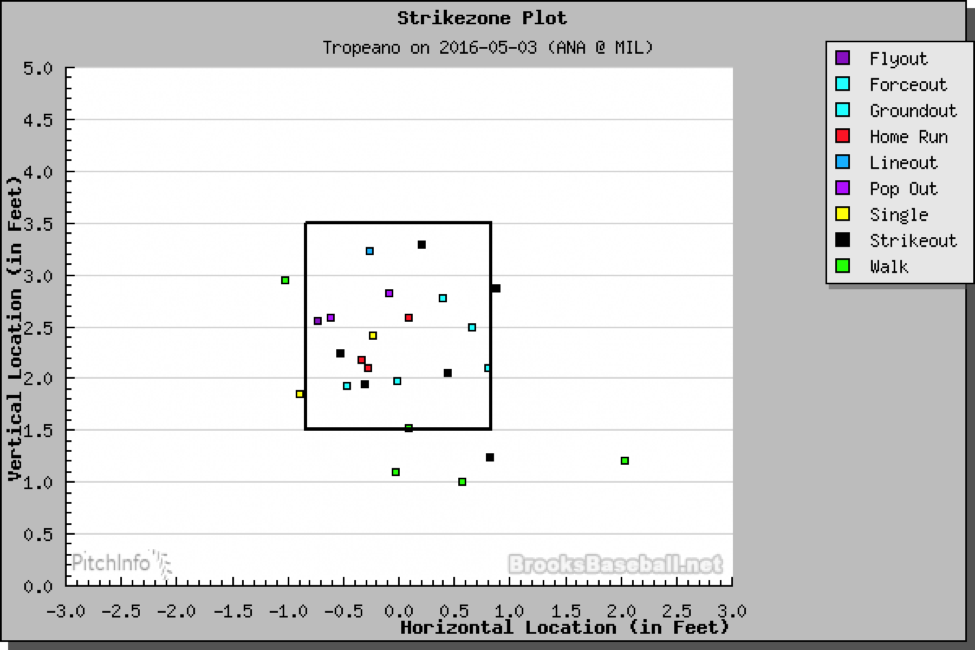 Worst Play (WPA):
This one is probably predictable, but the worst play of the game was Yunel Escobar’s double play with the bases loaded to end the 7th inning (-.282). Junior Guerra got through 6 innings and left the game with a 5-4 lead. Then Michael Blazek entered the game and decided to exemplify his uneven season by loading the bases with no outs via two walks and a single, then finishing the inning without allowing a run. He started off Escobar with two sliders, then got the routine double play ball on a fastball pretty much down the middle. Escobar just missed it. The Angels only got one more baserunner the rest of the game.

Trend to Watch
Chris Carter is streaky. Ryan Romano tackled it here, and anyone who plays fantasy baseball definitely knows this. He now has four home runs in his past three games. One interesting thing to note when looking at Carter’s season so far has been his selectivity and contact rates. His zone rate for pitches seen in the strike zone is .4528, which would be the lowest of his career. His career average has been .4848. As he’s seen fewer pitches in the zone, he’s also swinging less, once again at a career low rate of .4000, compared with his career average of .4592. In even better news, his contact rate has jumped to a career high of .6736, compared to an average of .6331. Those numbers hold for his strike zone swing and contact rates as well. Carter is also swinging at missing below his career average. The batting eye is as good as ever, and pitchers aren’t giving him much to hit. Let’s see if he’s at the start of a power surge.

Up Next:
Day baseball! The series against the Angels concludes tomorrow afternoon, and the Brewers are looking for a sweep, which would be their first of the season. Zach Davies will start for Milwaukee, and will look to allow fewer than four runs in a start for the first time this season. Hector Santiago pitches for the Angels. Santiago struggled in his last start against Texas, allowing four runs on eight hits with only one strikeout in 5.2 innings. Game starts at 1:40.

Tags: Chris Carter, Jonathan Lucroy, Junior Guerra, Michael Blazek |
Andrew Salzman
Follow @RealAndrewSalz
Personal fun facts: I've been to every current MLB stadium, my favorite animals are bears, and I consider myself an expert on fast food. I also really like baseball and am a licensed lawyer.
read more from Andrew Salzman