Tl;dr: Jimmy Nelson and Julio Teheran engaged in a pitcher’s duel, with the Brewers prevailing 2-1 as Scooter Gennett delivered the go ahead hit.

Top Play (WPA):
When you win 2-1 and the winning run scores in the 8th inning, you don’t need an advanced stat to prove that was the top play of the game. Gennett’s single off Bud Norris scored Jonathan Villar, and was worth .262 according to WPA. It was nice to see Gennett get the hit as he’s struggled since coming off the disabled list two weeks ago. Coming into this game, his OBP was .231, he struck out in 13 of his 40 plate appearances, and had no extra base hits since returning.

The biggest difference between April Scooter, who looked like a legitimate MLB starter, and May Scooter, who is unplayable, has been swings and misses. Pitchers right now can challenge Scooter with speed and he isn’t catching up. In April, he saw 167 four seam fastballs or sinkers and whiffed less than 5 percent of the time. Yet in May he’s seen 79 of those pitches and is whiffing in more than 20 percent of his swings. And when he is making contact, it has been weak, so it was mildly encouraging for him to hit a 94 MPH pitch.

Bottom Play (WPA):
Erick Aybar did not have a great game. While he had a hit and scored Atlanta’s lone run, he had two opportunities to bat with a runner in scoring position, and squandered both opportunities. With the game scoreless in the bottom of the second inning, Aybar came to bat with the bases loaded and no outs. He made solid contact off Nelson, but it was right at Aaron Hill, who caught the liner, then stepped on third base to complete the double play. WPA measured the play at -.178.

Aybar had another chance in the bottom of the ninth against Jeremy Jeffress. After a one out single by Kelly Johnson, Aybar grounded into a fielder’s choice and Johnson was out at second (-.105). Jeffress induced a fly out from the next batter, Nick Markakis, to end the game.

Trends to Watch:
Julio Teheran struck out 12 Brewers in this game, his season high, and Braves relievers added another 3 strike outs. Milwaukee has now struck out 354 times this season, good for third in all of MLB. Strikeouts aren’t inherently evil, or worse than other outs, but there is a problem when the team is swinging and missing so much. Here’s a Brooks Baseball chart of Julio Teheran’s season before last night’s game, focusing on pitch outcomes:

Other than the sinker and curveball, which were effectively shelved last night, the Teheran induced whiffs above his season averages on his three main pitches. Brewers batters are getting fooled too much.

On a less negative note, Jimmy Nelson had his third straight strong start! Generally, the keys to Nelson’s success have been keeping fly balls in the yard, and not getting too wild. This was his third straight start without allowing a home run. Nelson allowed 33 percent of balls in play to be fly balls, right around his season average, but tonight none left the yard. Even the Mallex Smith triple wasn’t hit terribly deep, it was just perfectly down the line, where Ryan Braun had no chance to catch it.

Nelson did walk three batters, but he got enough swings outside the zone to make this plot look respectable. 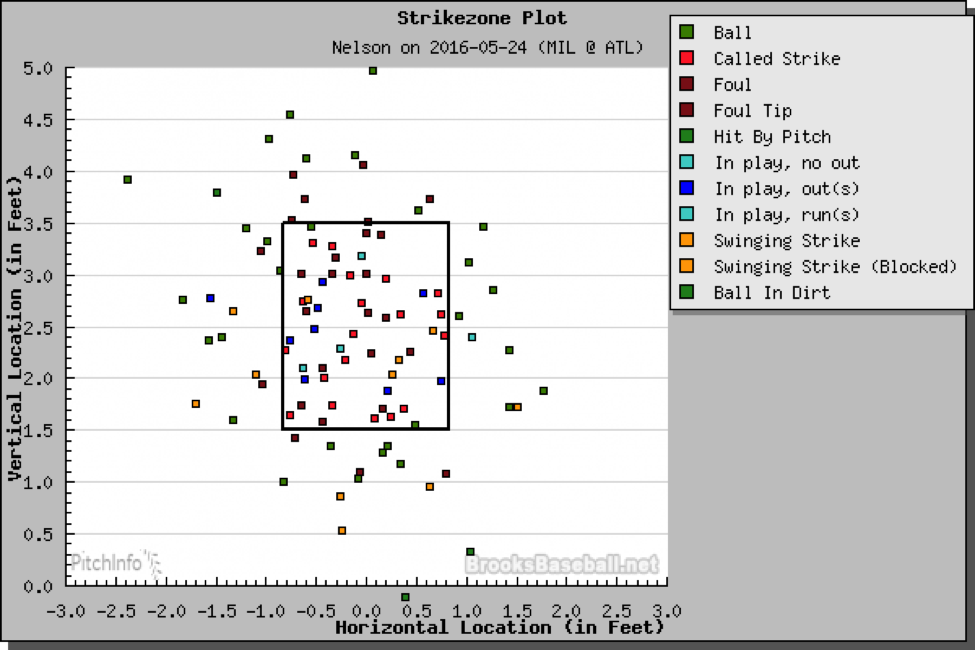 There are enough of those orange dots low and wide to make this outing successful. Not every team is as bad as the Braves and will give Nelson this much help in getting themselves out, but you take what you can get.

Up Next:
The teams play the second of their three game series in Atlanta, with first pitch at 6:10. Junior Guerra pitches for Milwaukee. He struck out 11 in 7 innings in his last start against the Cubs. Read up on that start here. Mike Foltynewicz starts for Atlanta. Folty has sandwiched two solid starts around two disaster games this season. Last week against the Pirates, he only lasted three innings and gave up five runs on seven hits. No walks though!

Tags: Jimmy Nelson, Scooter Gennett |
Andrew Salzman
Follow @RealAndrewSalz
Personal fun facts: I've been to every current MLB stadium, my favorite animals are bears, and I consider myself an expert on fast food. I also really like baseball and am a licensed lawyer.
read more from Andrew Salzman

Aside from blowing up the team with trades. What is short answer of how to get Brewers to being competitive again?
I believe pitching is no.1. but that is too easy! WHAT IS THE ANSWER?