I know, I know, it’s the damn postseason, and I’m writing about the draft, but hell, the Brewers aren’t in the postseason and the draft is an important part of the rebuilding process.

This all started because I was messing around with some draft data that I gathered from a wonderful website, you’ve already, probably, most definitely heard of called Baseball Reference. In messing around with the data I created what is called a Sankey Diagram to visualize which schools Brewers draft picks came from in 2016. 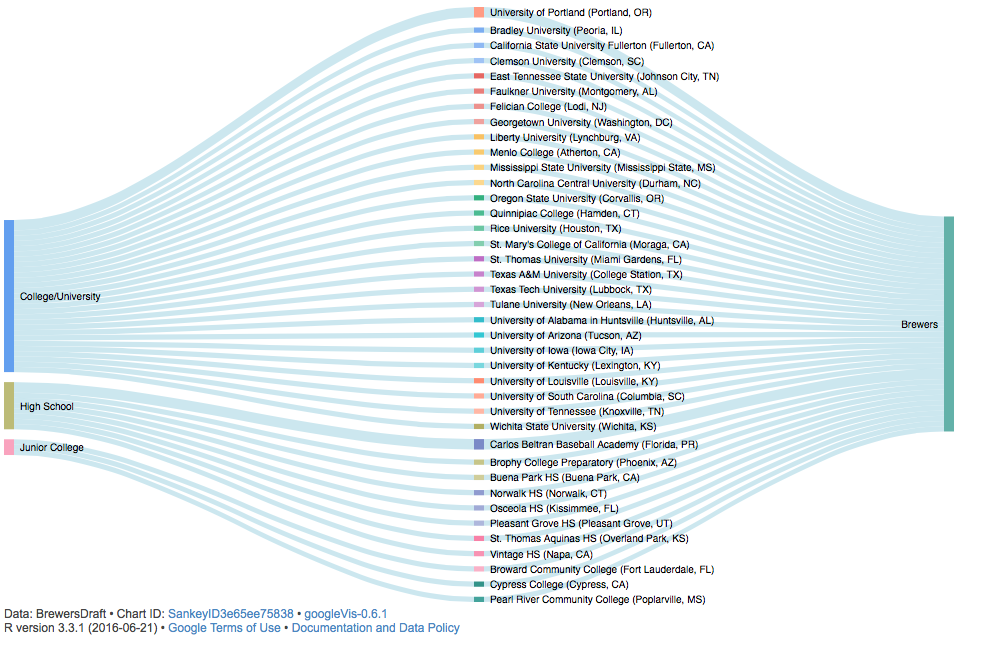 A few things are clear, and a few things aren’t with this diagram. What isn’t clear is which schools generated the most draft picks for the Brewers. I’ll address that later because it’s not as important. Secondly, and more apparent, is that most of the Brewers draft picks in 2016 came from the Colleges/Universities. In fact, it’s not even close. In 2016 the Brewers drafted 29 players from Colleges compared to only nine from high school and three from Junior Colleges. 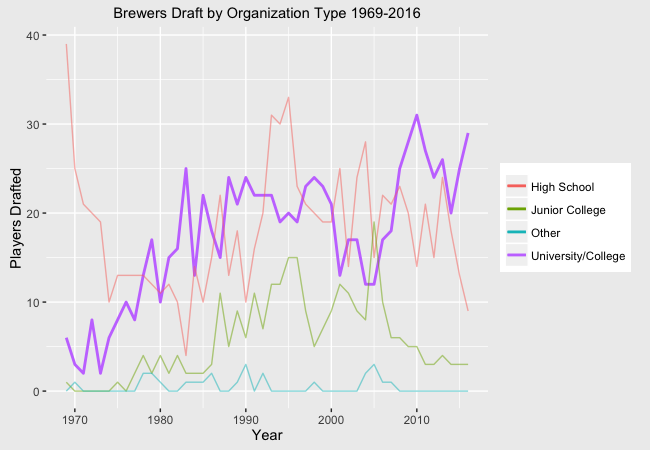 To some extent, I already knew this wasn’t a one-year trend because, for my very first piece on this site, I looked at this information. This time, all I have added is the 2016 information and the Junior College, plus the other, which are organizations where baseball reference did not specify the type. But, even looking at this information historically, 2016 stands out.

For the most part, players from high schools are usually further away in their development then players who attend College. Most of those players are usually older, but they’ve played at a higher level, therefore they are more likely to reach the majors, and reach the majors quickly.

That doesn’t mean that the high school player isn’t necessarily the better pick. Many high school players are extremely talented and have high upsides, which is why we see more and more teams drafting them in recent years. But if a team needs to win now, they might want to go for a college player and hope that that player can help them in a year or two when they will still be competitive.

But, the Brewers aren’t in win now mode. As we all know too well, they’re going through a rebuild. They’ve traded away a bunch of assets for prospects in order to win in the future. Yet, they seem to be more prone than ever to draft College athletes.

A lot has been written on this website about a quicker rebuild. How the Brewers have a number of good players on the major league roster and how they could be competitive in the next few years. Maybe, the Brewers agree with that notion, which is why they’re drafting these college players. It could be a way to speed up the rebuild.

Or, this could simply be an organizational philosophy. That the Brewers believe that College players are simply a better bet than high school players. This could certainly be true, and is probably more likely than the latter argument. The trend has been going up for a while. Meaning that for a while now, the Brewers have been prioritizing College players over High School players, long before there was any idea of a rebuild.

This could also simply be circumstance. It’s possible that the best player that simply falls to them in the draft happened to be a College athlete. After all, many scouts lauded the Brewers first round pick this year of Corey Ray. I’ve written before about how important the first overall pick is, and the importance of getting it right. That means that it would be a mistake for the Brewers to pass up on a high school player, just because he is from high school. The Brewers should take the best available player, and from the buzz surrounding their draft, it seems that they did.

Rebuilding is often more complicated than what people make it out to be. There are many phases in rebuilds and all aspects of the game matter. Some matter more than most certainly. The Jonathan Lucroy trade was a very important moment, much more than the 1191st pick in the 40th round. But, overall strategy matters too. What are the Brewers doing and what aren’t they doing during this rebuild? What are their strategies? Are they going after certain types of players, and why? Understanding what they are doing will help us gain a better picture of their plan and what is to come.

Below are the schools where the Brewers draft the most players, in their team’s history. These are only the top 10.