A few weeks ago, the Milwaukee Brewers and Kansas City Royals executed a minor trade that probably flew under the radar for most followers of the game. Personally, however, I was disappointed to see the Brewers part with right-handed pitcher/licensed financial advisor/political pundit/future lawyer Jon Perrin, who had been one of my favorite prospects to […]

The Brewers have made a series of moves lately, both in terms of standard (non-waiver) trade deadline impact deals and post-deadline deals, involving players that would be exposed to the 2019 Rule 5 draft (info here). These players include LHP Kodi Medeiros, a probable MLB reliever; RHP Luis Ortiz, a potential mid-rotation starter with more […]

The release of Baseball Prospectus PECOTA projections is exciting for many reasons, not the least of which is finding the player comparisons that helped inform the projection system. Since PECOTA (and its redesigns) is based in part on finding comparable players in order to assess “true ability” and design aging curves suitable to each prospect […]

In the fall of 2011, Jon Perrin arrived at Oklahoma State University as a lanky freshman with a mid-80s fastball and so-so command. He walked on to the  Cowboys’ squad that year and made five mediocre appearances, mostly out of the bullpen, resulting in a smoke-and-mirrors ERA of 4.05. But he had his foot in […]

The minor league regular season will be coming to a close within the next two weeks, and three out of the four full-season teams that are associated with the Milwaukee Brewers are still legitimately competing for a playoff spot. The Class-AAA Colorado Springs Sky Sox have a 9.0 game divisional lead and look like a […]

The 2016 season didn’t produce quite as many notable individual performances within the Milwaukee Brewers’ minor league system as the previous year had seen, but there were still a few pleasant surprises by players who we may start seeing included in the various top-100 lists that will come out over the winter. Lucas Erceg hit the […] 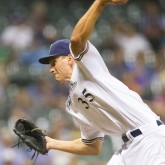 The minor league regular season wrapped up last week, ending the year for most of the prospects within the Milwaukee Brewers’ organization. As a whole the organization’s seven affiliates combined for a 328-423 record and had just two winning teams – AA Biloxi at 72-67 and low-A Wisconsin at 71-69. The Brewers had just one postseason entrant […]

While Brewers fans chew on the midseason BaseballProspectus Top 50, BPMilwaukee will continue to augment that list with looks at “up” and “down” prospects in the system. Yesterday’s feature included some of the prospects with highest regard in the system, so today’s feature turns to depth. One cannot overlook the system depth, even if one […]

The Milwaukee Brewers have had a long-running history of struggling to develop quality pitchers through their minor league system. These days though, it appears that narrative may be changing. While young big leaguer Jimmy Nelson and top prospects like Jorge Lopez, Josh Hader, Cody Ponce, Devin Williams, and Junior Guerra tend to get the bulk of […]