On Tuesday of last week, while I was away from my computer, the Braves and Diamondbacks cobbled together one of the most lopsided trades in recent memory (which was well recapped by the BP team). The Braves sent Shelby Miller and lefty Gabe Speier to the Diamondbacks for outfielder Ender Inciarte, right-hander Aaron Blair, and the 2015 first-overall pick, shortstop Dansby Swanson. When I finally got back to my computer and checked my Twitter feed, a swarm of people expressed a similar opinion in relation to this trade. The Braves got a huge haul for Shelby Miller. The trade was especially lopsided when you consider that Inciarte had about the same WARP last year as Miller, and when you package that with the former number-one overall pick and another prominent pitching prospect, it’s no surprise this deal is widely seen as a slam dunk for the Braves.

Many people the next day expressed their opinions on the deal, including Keith Law, who mentioned on ESPN that they (the Diamondbacks) were “nuts” to make this trade. However, that’s not the comment that caught my attention. He also mentioned that teams are getting better and better at selecting the number-one overall pick. He then cited examples such as Bryce Harper, David Price, and Stephen Strasburg as former number-one picks who have been successful. While those players are great, I still wondered if that statement was true — especially when one considers that Mark Appel was drafted just two years ago, and while his career has yet to come to a conclusion, he has had a number of struggles over the past few years. Then, there’s Brady Aiken who didn’t even sign with the Astros and the Tim Beckham debacle.

I, therefore, decided to set out and answer this question, and to be honest, I wasn’t able to come up with a satisfying answer. Here is a look at the trend, dating back to 1969.

Important note: The data was gathered from Baseball Reference, therefore, I used their WAR model. Baseball Reference also includes players who haven’t signed with the team, which caused me to manually take out the players who didn’t sign with the team. This was easy to do for the first overall picks considering only three players have not signed with their team. For the further studies, I did my best, but it was difficult and there may be some errors on my part, as it was done manually. That being said, I’m almost certain I didn’t make any egregious ones. Therefore, I don’t think the WAR number will be all out of wack. This list from Baseball America also helped a lot with this process. 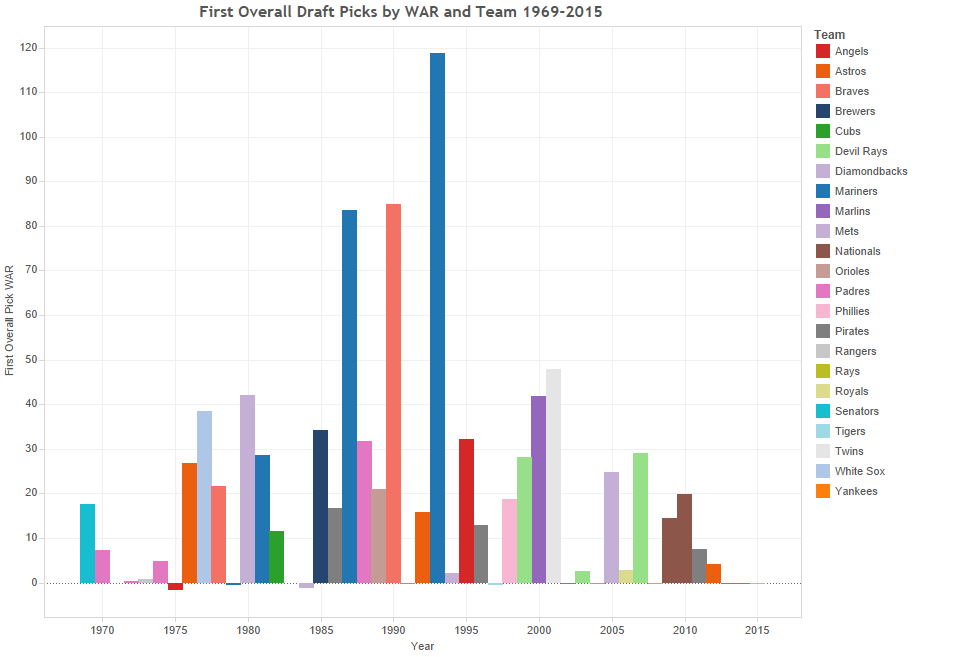 The trend, while giving us a sense of the situation, can be seriously misleading, mainly because it skews more heavily towards the older years. Those players have had a chance to finish their careers while players such as Bryce Harper, Stephen Strasburg, and David Price have yet to conclude theirs. One could then run a projection system to see how those players will likely perform throughout their careers, but, because there are so many factors to consider and players such as Harper and Strasburg are so young, there would be a ton of variance in the results, to say the least. Therefore, for this particular answer, I simply wasn’t able to come to any hard conclusions. Although I will mention that thus far the best first overall pick has been clearly Alex Rodriguez.

My next question, therefore, was how good have the Brewers been with their first overall picks? The Brewers, in their entire history, have only had one first overall pick. With it, they drafted (at the time of the draft) shortstop B.J. Surhoff. While not a star, Surhoff played nine seasons with the Brewers and finished his career with a 34.3 career WAR. Considering that on average the first overall pick averages an 18.9 career WAR (only including players who have finished their careers, so Alex Rodriguez is not involved in this analysis), the Brewers seemed to have done pretty well with their pick. This, however, is just another cruel reminder that prospects are fickle, and while having the first overall pick is good, the pick doesn’t always translate into a future star. That’s why it’s so important to stockpile prospects, and not simply the high-end ones.

This then led me to the question: How good have the Brewers been with their first-round picks? In the coming years, I suspect the Brewers will look to stockpile as many draft picks as possible in order to continue building their farm system. It is, therefore, extremely important for them to hit on their high-end picks as that is where most future stars come from. This isn’t to say that later rounds aren’t very important, but rather that most top end prospects come from the first round. This is where a lot of the top-end talent in their system will come from. So, let’s look at how they’ve done as compared to the rest of the league. 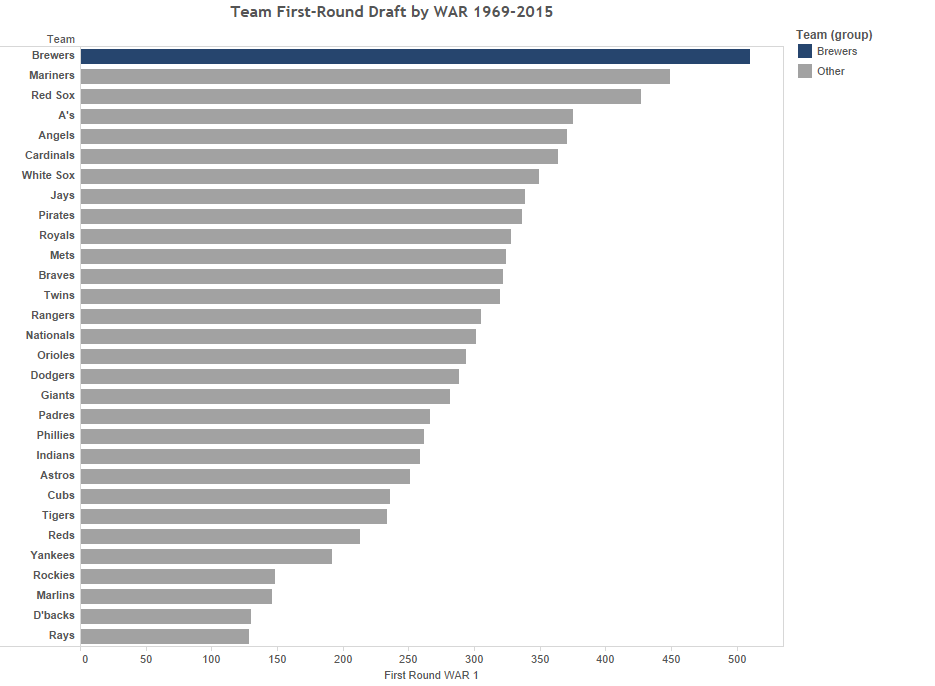 As you can see, since 1969, no team has had their first-round picks garner more overall WAR. The Brewers now seemingly have been the best team since 1969 with their first-round draft picks. That being said, if one looks at the bottom of the list, one can easily notice all the latest expansion teams. Looking at it on an overall level doesn’t exactly give those teams a fair shake, considering they haven’t had as many drafts as the Brewers and other teams. Therefore, I also looked at this information on a per average basis. 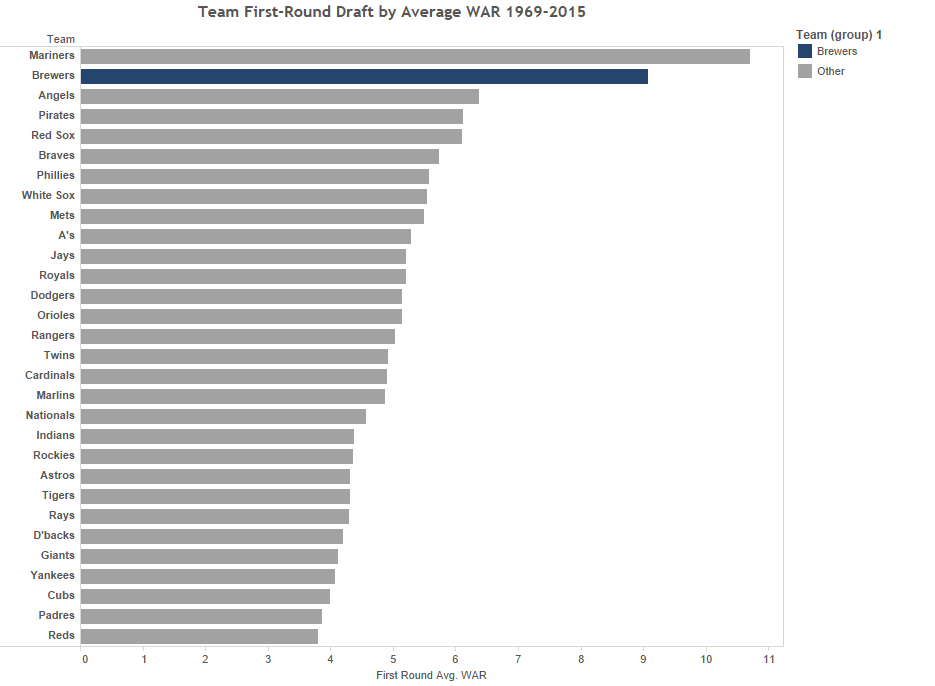 Now, while the Brewers aren’t ahead of everyone else on this list, they are by far the second-best team with their first-round draft picks. And it’s no surprise once one thinks about it. Robin Yount, Paul Molitor, Gary Sheffield, Ryan Braun, Prince Fielder, Ben Sheets, Geoff Jenkins, and more, were all first-round draft picks by the Brewers. While not all of these players compiled most of their value with the Brewers, they all went on to have very illustrious careers and proved to be well worth the first-round pick. Now, not all of the Brewers first-round picks have panned out, unfortunately. It’s the nature of the beast. What’s important to note, however, is that compared to the rest of the league, they seem to have done as good a job as any, which should give us hope going into the upcoming drafts.

I will also point out that this type of study has again a skewing effect. Teams who have done well in older drafts will have better results than teams who have done well in more recent drafts. The main reason the Seattle Mariners are so far ahead is thanks to Alex Rodriguez and Ken Griffey Jr. Both of those players are franchise-altering, which is sometimes all it takes to change the fortunes of a organization. It will be interesting to see how well the Nationals and Angels do once the career of Mike Trout and Bryce Harper are over.

The main point, though, is that the Brewers will need to keep up this type of success in the first round. Being able to hit on first-round prospects is a huge asset and will allow the Brewers to gain more high-end talent. And if any of the recent drafts are any indication, the Brewers are well underway. As J.P. Breen pointed out, “Ray Montgomery and his staff have been aces over the past couple years.” Just take a look at Trent Clark, who’s Troutian neck has already got many scouts buzzing. Baseball Prospectus has already ranked him as the number-four prospect in the Brewers system. This type of success in the first round will surely be welcome going forward, as the Brewers dive deeper into the dark and lonely ocean of the rebuild.