Last week, the Milwaukee Brewers traded shortstop Jean Segura and right-hander Tyler Wagner to the Arizona Diamondbacks in return for right-hander Chase Anderson, infielder Aaron Hill and infield prospect Isan Diaz. The trade has largely been painted as a significant win for the Brewers. Some have considered the deal a pure salary dump, as the D-Backs cleared approximately half of Hill’s remaining contract, while some analysts have criticized Arizona’s GM Dave Stewart for even thinking that Segura is an upgrade over in-house-option Nick Ahmed.

Baseball Prospectus published its trademark Transaction Analysis on the main site, featuring our own Ryan Romano and others. Be sure to read the entire TA to get analysis from multiple angles. In my opinion, those types of articles are worth the monthly subscription price on their own, so it’s quality stuff.

I have my own thoughts on the trade, though, and I want to utilize this space to pull apart multiple aspects of this trade from the Milwaukee Brewers’ perspective. This isn’t a simplistic trade. It’s quite clear that general manager David Stearns and his staff agreed to this move for a few reasons: (1) they believe Chase Anderson has some sneaky value over the next few years; (2) they adored 19-year-old Isan Diaz and were willing to pay $5.5 million of Aaron Hill’s salary to acquire the young middle infielder; and (3) hope.

Anderson posted a pedestrian 4.30 ERA for the Arizona Diamondbacks last year with a 4.16 FIP and was a 1.4-win player. That’s a decent back-end starter, all things considered, but it’s unclear that the Brewers should really be trading someone like Segura for a 28-year-old fifth starter. Even though the club has to like that Anderson has five years of team control remaining, two of which are at the league minimum, the move has to be something more than that. The Brewers must believe the right-hander brings something legitimate to the table — either so they can profit via the trade market or so Anderson can provide value in the win-loss column going forward.

The former Oklahoma Sooner enjoyed a solid first half in 2015. He compiled a 3.91 ERA before the All-Star Break, but that’s only part of the story. Anderson landed on the DL with triceps inflammation and missed the better part of a month. In the five starts prior to his stint on the disabled list, he gave up a total of 27 runs in 25.2 innings (9.12 ERA). It’s dangerous to dismiss a handful of starts as non-representative, I know, but it is notable that Anderson’s 2015 ERA was 3.26 without the five starts running up to his time on the DL.

It should also be noted that Chase Anderson saw his velocity jump after he returned from his arm injury. And not by a small amount, either. The right-hander started to throw harder than he has in the past two years: 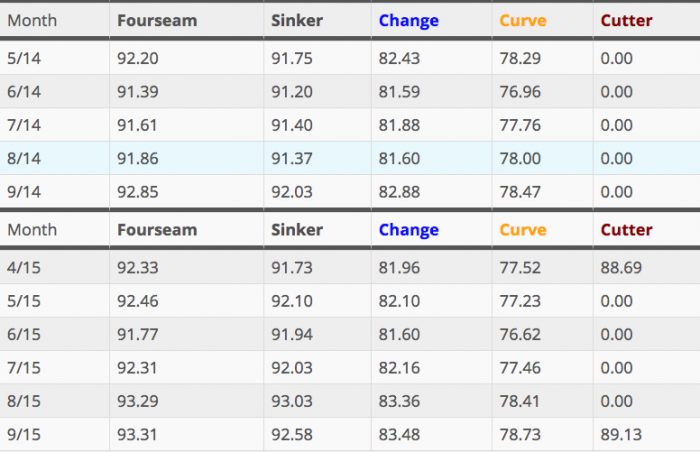 It’s no surprise that Anderson saw his strikeout rate jump from 15.4 percent during his pre-DL starts to 21.1 percent afterward. Of course, he did also struggle in September, posting a 4.91 ERA in four starts; however, that was mostly soured by a single bad outing on September 8. His final two starts saw him surrender only two earned runs in 10.1 innings while striking out 14.

All of this isn’t to suggest that Chase Anderson is about to breakout with the Brewers. Changeup specialists with mediocre fastballs aren’t world-beaters. We know this too well in Milwaukee. What all of this does suggest, though, is that Anderson is interesting and there are reasons to believe his 4.30 ERA from 2015 isn’t completely representative of his talent. If he can carry over his velocity gains to 2016, perhaps we’re looking at a different pitcher. If much of his season was masked by triceps inflammation that torpedoed the middle part of his campaign, we should see better overall results in the future.

And those question marks are what Milwaukee is searching for during their rebuild. The club is desperately searching for cheap/inexpensive options who have opportunities for improvement. Anderson will make the league minimum for the next two years and will not be eligible for free agency until the 2022 season. If he cobbles together a useful — it doesn’t have to be great — 2016 season, one can easily imagine him fetching an interesting prospect or two on the trade market. Or maybe he’s a competent back-end starter for the Brewers as they start to creep toward contention in 2018, as he’ll only be 30 years old.

We’re asking questions and we’re seeing signs hinting that Anderson could be something more than his overall stat line suggests. And, yes, we’re being optimists and ignoring the potential downside. During a rebuild, though, I’m not convinced that downside represents any risk whatsoever, so I’m not sure that matters too much.

Most baseball fans hadn’t heard of 19-year-old Isan Diaz before the Brewers traded for him on Saturday. The Diamondbacks drafted him in the second round of the 2014 draft — and many scouts raved about his upside — but he only hit .187/.289/.330 in his professional debut. People quickly forget about guys who can’t eclipse the Mendoza Line in the AZL.

All of that changed in 2015. The 5-foot-10 infielder demolished the Pioneer League, posting a herculean .360/.436/.640 slash line with 13 homers and 12 stolen bases in just 312 plate appearances. He won the Pioneer League MVP, and many scouts returned to their pre-draft notes and started salivating over what he could become in the future. In fact, FOX Sports’ Ken Rosenthal reported this week that the Atlanta Braves also coveted Diaz and were actively working on a deal to acquire the youngster. Fortunately for the Brewers, though, the Diamondbacks needed help at shortstop and valued Jean Segura over anything the Braves could offer (likely Erick Aybar).

I reached out to a few non-Brewers industry contacts, and the response was almost universally positive. One person opined that we’ll look back at this deal in a few years and think that Milwaukee “fleeced” Arizona. The same individual said that his organization loves Diaz and that he personally believes the young man to have “elite ceiling,” even if he makes the assumed defensive move to second base. Another scout dropped the seemingly omnipresent comp to a young Robinson Cano and raved about Diaz’s “fantastic bat speed.” A third person in the industry suggested that Diaz is one of the unheralded gems in the game and praised Stearns and his staff for acquiring him.

Of course, it wasn’t all positive. Another individual said that he likes the bat speed, but wants to see it at the full-season level before he forgets about the struggles he witnessed in the Arizona League. That same person says his lack of foot speed will make him a liability defensively and that his bat will have to carry a lot of the value. At 19 years old, the ceiling is tantalizing, but it’s disingenuous to ignore the holes in his long-term profile just because he lit up a offensive-friendly league, like the Pioneer League.

It’s clear the Milwaukee Brewers fall on the optimistic side of the spectrum, though, and built this entire deal around acquiring him.

This is the “hope” I mentioned above. The Milwaukee Brewers took on $5.5 million of Hill’s contract in order to get Isan Diaz in this trade, as the Diamondbacks are still desperate to clear payroll space for some unknown reason. But it’s not difficult to understand why the D-Backs don’t have room for Hill on the roster. He’s about to turn 34 years old and hasn’t been productive for over two years. In fact, he hasn’t even been worth +1.0 WARP in the past two seasons combined.

And there’s not much to statistically suggest that Hill will turn it around, either. His power numbers have fallen. His BABIP has plummeted as his batted-ball velocity has gotten weaker. Hell, even Madison Bumgarner hit the baseball as hard, on average, than Hill in 2015 (88.86 mph). He’s responded by trying to become more selective at the plate, but that success has been uneven.

The Brewers acquired Hill so they could get Diaz. They also are hoping that he can dip his bat into the fountain of youth, so they can recoup some value on him in the summer. But that’s all it is. Hope. There isn’t much to indicate that Hill is a useful major-league player at this point in his career. But the Milwaukee Brewers are in a perfect situation to play him without too many repercussions. If he can turn back the clock, the move seems utterly brilliant. If not, the Brewers have other options at third base and second base, and the trade wasn’t even about him in the first place.