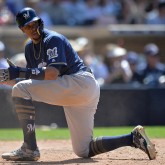 Outside of Eric Thames, there may not have been a more interesting player coming into the 2017 campaign than Keon Broxton. Acquired by the Brewers in December 2015, Broxton broke onto the scene in 2016. He slashed .242/.354/.430 in 244 plate appearances, accumulating a 1.4 WARP. Drag that out over a full season and you […]

“Opening Day is every day”: a quote across Monte Harrison’s wristband he shared with me after his game this past Saturday. He had just finished the game 0-for-3 with a walk, a run scored, and a strikeout. There was no sign of dismay or frustration due to his hitless day, as he had just finished […] 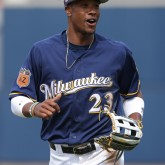 Just a few weeks ago, fellow BPMilwaukee writer Sean Roberts laid out a scenario where the Milwaukee Brewers become a .500 club in 2017. The Brewers, who PECOTA projects finishing 78-84, are just a few right breaks away from hitting that 81-win plateau, a feat they have only accomplished once in the past four seasons. […] 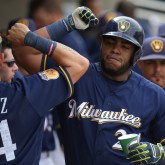 On February 2nd, first baseman Jesus Aguilar became a member of the Milwaukee Brewers, after being claimed off of waivers from the Cleveland Indians. Aguilar, a 26-year-old right-handed hitter, has only appeared in 35 Major League games, totaling 64 plate appearances. In an extremely small sample size, the Venezuelan slashed .172/.234/.190 during that three year […] 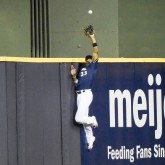 On December 6, 2016, the Milwaukee Brewers and Boston Red Sox struck a deal that sent then-Brewers reliever Tyler Thornburg to the Red Sox for third baseman Travis Shaw and minor leaguers Josh Pennington, Mauricio Dubon, and a PTBNL or cash. Shaw was the headliner in the package the Brewers received, but Dubon was arguably […]

After going undrafted out of high school, RHP Corbin Burnes had a long way to go to fulfill his dreams of playing professional baseball. He was undersized and underdeveloped, but was given a chance to continue playing and starting at St. Mary’s College of California. Burnes, along with first year head coach Eric Valenzuela, struggled […]

After being drafted by the Milwaukee Brewers in the second round in June 2016, third baseman Lucas Erceg made quite a first impression. He joined the Helena Brewers on June 19th and managed to only stick around for a month due to the fact he slashed .400/.452/.552 with eight doubles, two home runs, and 22 […]